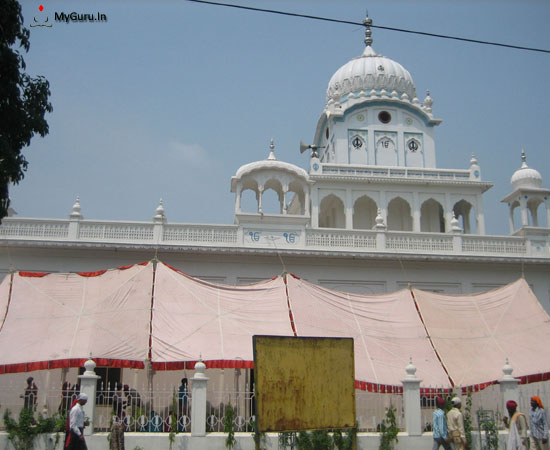 This Gurdwara is situated in the West part of town Jaito, which is at a distance of 30 Km from Faridkot City and 17 Km from Kotkapura town on Faridkot - Kotkapura - Mukatsar Road.

History
Gurdwara Gangsar Sahib, Shri Guru Gobind Singh Ji used to stay at place where Gurudwara Shri Tibbi Sahib is situated now. When Guru Sahib asked Bhai Kapura for his fort at kotkapura to fight against the Mughal Army, he refused to support and give his fort. Guru Sahib came here to jaito. Here GURU SAHIB got his tent pitched on Tibbi (A Small Hil Top). There GURU SAHIB made singhs to practice for the Arrow shootings. In the evening Guru Sahib came to this place where Gurudwara Gangsar Sahib is situated and took rest. There was water shortage in the Malwa area at that time. There was water resourses near Gurudwara Tibbi Sahib, but there was little pond near here. Guru Sahib used to go to Gangsar Sahib for any type of water requirement. GURU SAHIB showed a Brahmin flowing Ganga here. Guru Sahib also made an Urn appear from the pond which had fallen into the river Ganga. From that ownwards this place was known as Shri Gangsar Sahib. Gurdwara Gangsar Sahib, Shri Guru Gobind Singh Ji, close to the old Jaito village, commemorates the site visited by Guru Gobind Singh who arrived here in December 1705 from Kot Kapura.
The modest old building was replaced by a higher one by Maharaja Hira Singh, Nabha (1843-1911), renovated since through kdrsevdby the successors of Sant Gurmukh Singh. The Gurdwara derives its name from the adjacent sarovar, Gangsar. Here was interrupted on 14 September 1923 an akhand path for Maharaja Ripudaman Singh, the deposed ruler of Nabha.

Successful conclusion of the two year agitation protesting against the interruption of the akhand path was celebrated with the holding in the Gurdwara recital of a series of 101 akhand paths from 21 July to 6 August 1925. The Gurdwara is endowed with 70 acres of land and is administered by the Shiromani Gurdwara Parbandhak Committee through a local committee, which also manages the other two gurudwaras in Jaito. A special religious divan takes place on the 21st of February every year to commemorate the martyrs who fell in the firing on Akali volunteers marching peacefully on 21 February 1924.

Gurudwara Tibbi Sahib is situated on the sandy mound consecrated by Guru Gobind Singh`s visit in 1705. It was from this vantage point that during the Jaito agitation the peaceful jaiha of 500 Sikhs was fired upon. Twentyone of them were killed, besides many wounded. Yet the jathd went on undeterred and reached Gurdwara TibbI Sahib, where it was beaten up by police and taken into custody. The present building constructed during the 1980`s by the successors of San t Gurmukh Singh is a highccilinged hall inside a walled compound, with the sanctum at the far end. Gurudwara Angitha Sahib, half a kilometre south of Gurdwara Gangsar Sahib, was built on the site where those who fell martyrs in the firing on 21 February 1924 were cremated.

Jaito now a flourishing market, became in 1923 the scene of a long drawn agitation launched by the Shiromani Akali Dal roused by the forced abdication of the Sikh Maharaja of Nabha. The campaign followed the interruption by the Nabha state authorities of the akhand path or continuous recitation of the Guru Granth Sahib started at Jaito, which lay in the deposed Maharaja`s territory, to express sympathy for him.Jaito now has three gurudwaras of historical importance.